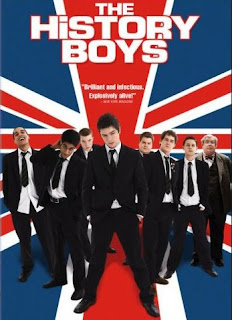 Briefly, my apologies for so long a lapse - it seems that the proxy server (aka The Great and Powerful Censor) is at least partially A.I. and in less than a week "learned" to ban my access to all things Blog and Interesting. It's becoming a challenge; thankfully, I am enjoying the job and colleagues.

Jason's working a rehearsal dinner tonight so I've got the television to myself and Friday is a typical, dreadful night for programming. But I've got free HBO and free HBO On Demand. Scrolling through the list, I ran across The History Boys. I'd only heard of this play/film from a former co-worker who is an anglophile to the nth degree in addition to being a theatre person (said in a snooty aka uppercrust British accent of course) but it sounded very interesting and not something Jason would enjoy so I settled in and clicked on it.

Originally written for the stage by Alan Bennett, The History Boys is a multi-layered coming-of-age story set in 1980s Sheffield, England. On the surface, the story of 8 boys hoping to be accepted at an Oxbridge school (a cute term for the two pinnacles of English educations: Oxford and Cambridge Universities) is about education and the black and white difference between learning and testing. They have been well-groomed by two very hands-on teachers but, while they know an awful lot about a great many things (can recite Auden on call and play-act a transaction with a prostitute in French), they don't stand out. Enter Irwin, a much younger teacher bringing a little bit of a No Child Left Behind theory (minus the complete and total ignorance of the very definition of education, of course) mixed with a healthy dose of salesmanship to these ambitious boys' study plans.

Undulating beneath school boy tales comes the real meat of any coming-of-age story: the sex. In this case, both hetero and homo and a little here and there. The General Studies teacher, Hector, has a tendency towards pederasty which would typically be cautionary Hollywood fare if not for the unique characters of the boys who play along without playing along. It is a laugh to them, something to even the field between teacher, who should normally be of a vaulted stature, and student. At the end of their first classroom scene together, Hector turns to each boy to ask if he wants a ride home on the back of his motorcycle. This is apparently a standard offer and to be followed by an expected grope before reaching home. The boys aren't homophobic and they aren't afraid, it's a joke to them to see if they can avoid the grope while Hector believes he got the grope.

I am very pleased with the movie. The accents can get heavy at times, I made friends with the rewind button, but it's a different coming-of-age movie than I am used to. I liked it very much. The ending almost seemed a little Hollywood to me and not having seen the play, I don't know if that is unique to the movie, but I wasn't upset at it, I just wasn't surprised.
Posted by dbz at 9:57 PM

Email ThisBlogThis!Share to TwitterShare to FacebookShare to Pinterest
Labels: alan bennett, HBO, No Child Left Behind, On Demand, pederasty, Sheffield, the history boys

How does it compare with Dead Poet's Society?

Oooh- I love those days when you can sneak in a "just for me" movie. Sounds like you found it quite enjoyable-- and I hadn't realized all the edgy undertones. Good review!