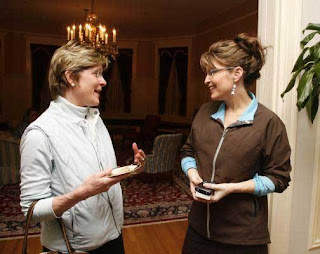 Wow, is Debbi really going to delve into Internet conspiracy theories? Can she possibly be that bored for drama?

The answer, my friends, is actually no. I'm not starved for drama, it's election season - drama Is. But some dramas are so compelling, that I will stop what I am doing to watch the train wreck unfold.

There is, in fact, drama number two.

Now, let me preface this to say that I am not sayin', I'm just sayin' - or rather The Daily Kos and many other sources are just sayin' and I'm just passin' on. The story is intriguing, especially when you get to the last and most damning part of it. Of course there are compelling reasons that dispute the story just as there are compelling reasons that give credence to it.

When Sarah Palin revealed to the public that she was pregnant at 7 months, she was greeted with reactions of amazement. No one suspected, even at 7 months. 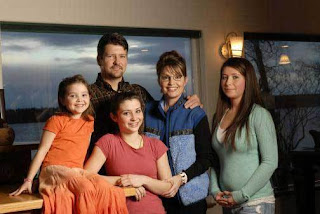 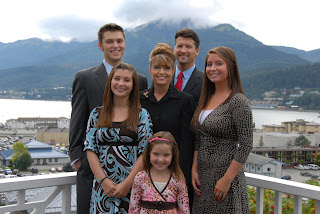 Notice that Sarah Palin doesn't look pregnant or post-partum in either picture. But someone else does.

According to The Daily Kos and before that, several Alaskan press sources, the rumor is that Sarah Palin's youngest child, Trig Palin, is actually Sarah Palin's grandson and the son of her eldest daughter Bristol Palin, seen above in both photos to the right of the family. A look at the photos indicates *something* unusual in the torso area of Bristol's images.

Around the time, Bristol was removed from school for 4 months with an apparently raging case of mononucleosis to have lasted 4 months rather than the usual one or two. (Note: mononucleosis cases swelled in the 1950s when parents would use the diagnosis to remove their pregnant daughters from school long enough to give birth and stop showing.)

Of course, the caveat to this, in many people's eyes, is that we all know children of Down's Syndrome are more likely to appear with older mothers. Sarah Palin was 44 when Trig was born therefore wouldn't it be more likely the child is her's? It certainly would seem so but, according to the March of Dimes website:

The final blow, in my opinion, is the circumstances of the birth itself. I will just quote The Daily Kos rather that re-write what has already been so well-written:

On Friday, April 18th, 2008, Sarah and her husband Todd were in Dallas, Texas for a Republican Governor's Convention. They had been in town for three days already, but Sarah had yet to give her keynote speaker address on energy policy. Then early Friday morning at 4:00am, Sarah began leaking amniotic fluid. Instead of checking into a hospital, she instead made a call to her doctor, and delivered the keynote speech.

"I was not going to miss that speech," she says.

She rushed so quickly from the podium afterwards that Texas Gov. Rick Perry nervously asked if she was about to deliver the baby then.

The oddities only grow from here on, as instead of rushing to a Dallas medical facility that could treat a mother who's amniotic fluid has been draining for hours on end (made even more crucial due to the fact that this is occurring a full month prematurely), Sarah & Todd instead opted to... Fly all the way back from Texas to Alaska. A dangerous choice, as with each pregnancy (once again, in this case after four previous), a mother's window of labor to delivery grows shorter and shorter.

Aboard Alaska Airlines, the flight lasted for eight hours, with an additional landing in Seattle. The majority of commercial airlines require mothers seven months pregnant to provide a doctor's letter to fly, but Sarah did not inform the airline of her condition. Alaska Airlines is one of the few airlines that do not require such a notice, despite the possibility of an emergency landings being required in such scenarios. That said, no one on board noticed that Sarah was going into labor:

"We leave the decision to fly up to our customers and their medical advisers," according to Alaska Airlines representative Caroline Boren.

"Governor Palin was extremely pleasant to flight attendants and her stage of pregnancy was not apparent by observation as she didn’t show any signs of distress," Boren said.

Eight months pregnant. A 6.2 pound fetus. No one notices a visible trace. By the third trimester, a perfectly fit woman not wearing anything less than a space suit should be easily spotted as pregnant. Not in Sarah's case.

The plane then made a landing in Anchorage, Alaska. Does Sarah then visit a medical facility that can accommodate a premature birth in Alaska's most equipped city? No. She drives 45 minutes away, to Mat-Su Regional Medical Center, right outside the small village she used to govern as Mayor, Wasilla. Trig Palin is then delivered one month premature, Friday night. Sarah returned to work after three days.

The inherent need to absolutely have Trig delivered in a remote and possibly ill-equipped facility for premature deliveries, where Sarah would likely have numerous contacts and pull, does not sit well. The doctor, Cathy Baldwin-Johnson, approving of all of these actions borders on malpractice. Not treating leaking amniotic fluid causes infections, and time is of the essence after water breaks. Husband Todd Palin simply delivers this winner of a line:

"You can't have a fish picker from Texas," said Todd.

A poor motivation, to be sure. Another motivation began making its rounds in the Alaskan legislature, where everyone was initially shocked to hear the news.

To wrap it up, I feel a bit dirty putting this out there, as I will probably be judged for not only besmirching the reputation of a 16-17 year old girl, but as well, for insinuating that if this is untrue, she is fat.

I honestly am doing neither - my intent is to continue being political until political is no longer cool and this is one of those political stories that is squeaking too loudly to ignore.

If it is true, it says something amazingly bad about Sarah Palin as both a trustworthy politician and a mother; if it is false, well then it falls where all the false scandals and conspiracy theories fall: The Star or Weekly World News. I have read that the National Enquirer, breaker of the John Edwards affair scandal, is up in Alaska trying to break this and in the wake of the John Edwards affair scandal, you know mass media will pay more attention to the Enquirer for a little while now, which means through election season, at the very least.

I'll probably wrap up the RNC afterwards, should it even go on - there is talk of a postponement in order to concentrate on Gustav and if they truly feel that way (as opposed to this being "for camera's sake" only), then I applaud them and thank them because sometimes Mother Nature is more important that any form of government.

Edited to Add: This blog post is not intended to judge a 16 year old girl in a day when pregnant teenagers no longer are newsworthy, so abundant are they, nor is the intent to judge a mother but rather to judge the politician. The other side of the coin to fame and power is people rooting through your trash and telling other people. I am sure the same can be said of most other sources on this story. If this does turn out to be true, John McCain will have to ponder precedence and procedure in replacing Palin with another, better suited running mate and that is the real story behind this.

Hello, I've found your blog by chance. I think this is Super.
I will regularly visit your blog. Please edit your
Blogjust as nice as you always do. It would be nice if you comment my blog. The link:
http://rentner-haben-keine-zeit.de
And if you have time the three Google Adsense advertisements with ID. They express a
small salary from U.S. cents and at least paysome of the bills.! My address can be found on my blog at Impressum. Thank you very much and have a nice day!

And I look more pregnant than all of them.

Meanwhile, I'm still seething over her apparent comment (quoted by Maureen Dowd) that she wore her hair up and glasses to look "frumpy." From someone who wears glasses and frequently wears her hair up, f### you, Sarah!

So my head is spinning--it doesn't seem possible, but here's a link I saw posted elsewhere to a picture of Sarah Palin 8 months pregnant with one of her other children.

And for the record, when I was pregnant with my third child, at age 34, I started showing roughly 5 hours after I got the positive pregnancy test; by the time I was 8 months along I had my own gravitational field.

and now I actually think I might believe this more than I have before.

Okay, this is the latest I got from a family connection:

Apparently Bristol Palin is pregnant right now. It seems to blow the theory that Sarah Palin's pregnancy was faked, but raises all sorts of other questions. (And those pictures of Sarah Palin and that whole story are still suspicious, no doubt.)

Family values, anyone? With a little abstinence-only sex-ed for fun?

yep, read about that right before taking off ... this has fuzzy math written allllllllll over it!