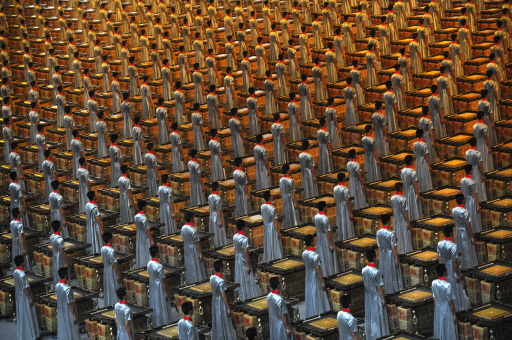 Cesar Cielo (Brasil) - he just finished and won the 50 meter freestyle swim in the Cube ... didn't breathe once in those 21.30 seconds. Which made me twitchy. I tried a flip-n-twist at the pool a few weeks ago and got lost somewhere in the middle, under water. I was surprised just how little air my lungs held and when my feet pushed off what I thought was the bottom and I didn't surface (my guess is I got discomboobulated and I was actually pushing off a wall), I actually began to believe that I was going to have to breath water. I was on my last millisecond when I surfaced. I got out of the pool, dried off and haven't been back. I get a little short of breath every time I think about it - almost claustrophobic, which strikes me as unusual but then again, claustrophobia is essentially the same concept but with solids rather than liquids. Cesar's swim reminded me of that.
Dara Torres (USA) - is 5 years older than I am, on her 5th Olympics (and she skipped 2 in the middle), swam a semifinal in the lane next to a 16 year old (25 years her junior -cough) ... and placed first. Yea, it's only a semifinal, whatever, she had one long vein popping on her perfect biceps.
One last swimming thing: Michael Phelps ... that's all.
Martins Plavins & Alexandrs Samoilovs (Latvia) - started off as the 23rd best men's beach volleyball duo of 24 teams, played the 1st best team ... and beat them. They're so good that they have no equal or near competition where they come from so they practice against teams of 6 on their Baltic Sea beach.
Didn't those Chinese gymnasts look young? Like, really, really, very, very young? I think they looked young.
On the topic of the Opening Ceremonies, a short week ago ... 2008 Fou drummers chanting and thank God they were directed to smile more because that much percussion and that much male chanting coming from a population that dwarfs our nuclear-family citizenry can be quite intimidating ... throw in 2008 white-clad martial artists and you've got a swelling amount of red-state hysteria.
I'm miffed that both softball and baseball were voted off future Olympic schedules - having wasted over 30 minutes watching both the male and female synchronized diving matches, I think softball and baseball got the shaft.
All-in-all though, I am very taken with the Olympics in a way I never have been before and the credit belongs to China. Had the Opening Ceremonies been the same ol' same ol', I would have watched for 10 minutes, turned it off and not probably returned. And perhaps I would have spent all that extra time blogging.
Posted by dbz at 10:06 PM

I think it was the opening ceremony that sucked me in, too! All that majesty and spectacle and the stories that were being told about various athletes. Julie tonight said that the Olympics is really one big sporty chick flick -- full of drama and sorrow and heartbreak and the occasional happy ending.

Getting a rub down.

OK- first of all, I think you were posting on my blog as I was reading yours. Weird.
Secondly, GO DARA! What a woman, eh? Did you see her making sure that the qualifying heat didn't start until her "friend" had her suit fixed? Love her. I hope she crushes all them young whippersnappers! (Please think of me saying that last sentence with a whistle and a spit)

Or how about that 38-year-old woman who just won the marathon? She was amazing! I think she ran a good 5 more laps AFTER she'd already won!

I saw that! and then Dara got the silver and let's not forget Germany's Oxsana (sp?), the 33 yr old gymnast ... just proving that older women kick ASS!